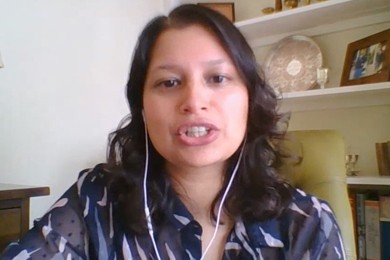 How do you get more women in stories when in India it’s hard enough for them to get in the newsroom or work in the field?

Tuesday’s Indian Media Leaders eSummit turned a spotlight on such issues, with a discussion on the impact of women in news – and how they managed it – and an uplifting case-history on the BBC’s 50:50 project.

Because when issues of caste and class were already making it harder for women in journalism, along came the pandemic. Should (or could) Indian newsrooms be more female-friendly; would “gendering the workplace” make things easier or harder; how do you avoid “bringing the house into the workspace”.

Meanwhile, the road to senior leadership roles for women in news has become harder with the sheer logistics of COVID-19.

“Making allowances is not fair to others,” said Indian journalist Rohini Mohan, who recalled being taken as a small child into the newsroom by her mother. “We all fall short in terms of class and caste.”

Chairing the panel, Quintillion Media co-founder and chief executive Ritu Kapur asked whether harassment would be more complex and complicated, post pandemic, while Mojo Story founder-editor Barkha Dutt talked of the problems of having to fight for stories: “Women spend their lifetime dealing with the men who harass them – they don’t want double punishment.”

She believed the future of women’s journalism would be freelance-driven, but spoke of the problems of “not having the support of the newsroom behind you” and the logistical issues of insurance, and even taking a bathroom break for women in the field.

Equality in the newsroom would have to extend to equality in the home, something DT Next founder-editor Yagna Balaji thought home help couldn’t address: “The way women look after their husbands cannot be substituted,” she said.

Rohini Mohan argued the need to take a part time job to “pay the bills until the assignments come in” and then to concentrate on “stuff you can be proud of”. Barkha Dutt thought it was senior journalists’ public duty to “toughen girls up”, something she said they will thank her for later. Yagna Balaji stressed the importance of mentoring young women to be self-reliant emotionally, while Mohan simply urged hiring more women – “not just because they come at a discount” – and giving them contracts.

After such grassroots issues, you wondered how the BBC’s 50:50 focus on equality of voice would have gone at the same time.

Since then, the concept has not only been achieved – with performance improving yearly – but is extended to ethnicity and disability.

Nina Goswami, a journalist whose title is creative diversity lead, told delegates from London, that objectives were being achieved without compromise on quality, but instead widening the base of resources.

“Measuring what you control” means excluding presenters – decided by someone else – and ‘players’ (so prime minister Boris Johnson is excluded) but counting everyone else, once.

Now more than 670 teams – among them even orchestras – are keeping to the key principles, as are more than 100 partners in a variety of countries including Australia’s ABC and the Financial Times.

Not only is the ‘red’ on charts reducing, but 62 per cent of users noticed that more women were in the content and 44 per cent said they enjoyed it more.

Now they’re seeing how the core principles look on disability and ethnicity, where the new target is 50:20:12 for women, ethnic minorities, and disabled representation.

“Although this does change depending on the audience,” says Goswami, explaining that 50 per cent ethnic represents BBC-TV London’s audience, while eight per cent is a better match for BBC Scotland.

“Some found it difficult to move off zero per cent on disability, but we’re representing the world better now,” she says.

People had wanted to be involved from the start, with the idea spreading by word of mouth and growing “grassroots up”, especially when director-general Tony Hall bought in.

“It’s not a quota system, just something to get journalists to think about quality,” says Goswami, who still finds time to edit the evening news.

Earlier Angela Pacienza, executive editor of Canada’s Globe and Mail, discussed strategies to “reframe the relationship with audience” by commissioning content linked directly to user needs, and South China Morning Post executive managing editor Zuraidah Ibrahim (pictured left with WEF executive director Cherilyn Ireton) talked of the balance of print and digital: “Think of print as your prom night, where you put on your best,” she said.

There were also the issues of working from home – making the newsroom less attractive now, and helping on issues such as back pain – “we all live in shoeboxes” – by letting staff take chairs from the office.

And of course in Hong Kong, “the line between activism and journalism”.

“It’s been very hard for people to cover the story and not be part of the story,” she said. “This is the place people were born and grew up, and some were very emotional; there were moments where we had to have deep conversations, leave emotions at the door.”

Experts invite feedback on the tough realities of news in Asia

Strategy and cash back LatAm push into paid content