Pressing on in Christchurch ... and a new tower drops into Petone 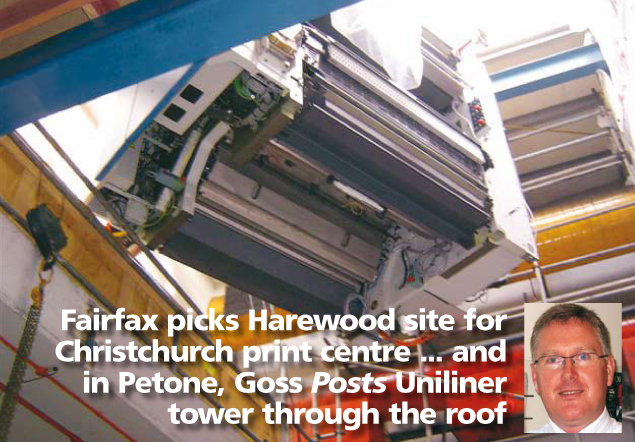 With a site chosen in Logistics Drive, Harewood, on the north-western outskirts of the Christchurch, and building work underway, it’s now full speed ahead on a new Fairfax New Zealand print centre for ‘The Press. A four-tower, two-folder Goss Uniliner 80 press – similar in most respects to that being installed at Ormiston – will be the centrepiece. Commissioning of the press – along with CTP and mailroom – scheduled for mid 2009 will bring new flexibility and opportunity to the flagship daily, and replaces a mixture of Goss Metroliner and Colorliner, some of which dates back to the paper’s switch to web-offset and phototypesetting in 1983. The new plant will produce the six days-a-week broadsheet ‘The Press’, as well as the southern edition of the ‘Sunday Star-Times’ and community newspapers including the 116,000 ‘Christchurch Mail’. Voted Qantas Newspaper of the Year again in 2007, the 146 year-old flagship title has a 95,000 print order which blows out to 120,000 and up to 172 pages on Saturdays. Editorial, advertising and other departments will remain at the Cathedral Square head office, where group operations manager Nigel Bailey (pictured) says plans for a sale-and-leaseback agreement are on track. Bailey says the commissioning process will benefit from Fairfax Media’s experience in Ormiston, Queensland, where a similar Uniliner 80 is currently being installed. The new press is fully optioned with a high level of EAE Press Control automation, as well as QI Press Controls cut-off and colour registration system and Baldwin’s spray dampening. It shares the same configuration, with reelstands and towers at right-angles to the two folders, and the web turned after the tower in an overhead roller hamper. A Ferag mailroom system has been ordered, and the CTP technology installed at the Cathedral Square head office – as part of a group rollout of Krause systems, with Heights processors and Nela optical plate benders – will be moved to the new site. “The new all-colour press will take a lot of complexity out of producing the newspapers, and will significantly improve quality and productivity,” says Bailey. In Petone, north east of Wellington, the first phase of a planned upgrade of print facilities is complete with the addition of a Uniliner 80 tower to the existing Goss double-width line which prints the ‘Dominion Post’. Group operations manager Nigel Bailey says the add-on – to a line which includes an HT70 tower as well as mono and satellite units – was a “practical solution” to increased demand for process colour: “The major drive was to achieve 100 per cent colour,” he says. The new shaftless Uniliner tower – similar to those being installed at Christchurch and Ormiston, and weighing 70 tonnes overall – was craned in through the roof in three sections and integrated onto the existing pressline. The new tower went into live production in June, ten days ahead of schedule. The press upgrade project continues until September with the mechanical overhaul of the HT70 tower unit and conversion of Units 3 and 4 to back-to-back process colour. On completion, the four-web press will deliver 64 pages broadsheet, all in process colour. Biggest challenges were in upgrading and integrating the Harland Simon press controls into the existing control system: “It was relatively straightforward but obviously integrating new technology with old technology presents challenges. The team did a terrific job with this installation.” Work was scheduled around production requirements, but with no existing units to remove, disruption was minimal. Options for a more comprehensive upgrade at the site continue to be evaluated. • Reproduced from GXpress NewsLeaders Goss International supplement
Sections: Newsmedia industry