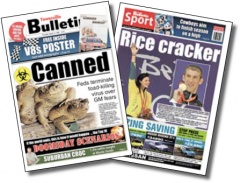 A new five-tower manroland Geoman press and expanded ferag mailroom at News Limited’s ‘Townsville Bulletin’ will bring extra capacity colour capacity and ‘value-ad’ capability to the paper and northern editions of ‘The Australian’ and the Brisbane ‘Courier-Mail’. Last upgraded in 1997 with the addition of a press from the former Bowen Hills (Qld) print site, Townsville currently prints the North Queensland edition of the ‘Sunday Mail’, and the ‘Australian’ from Monday to Saturday, but only Monday-to-Friday editions of the ‘Courier-Mail’. About 20,000 copies of Saturday’s paper are currently flown up from Brisbane. The $52 million project was announced by News Limited chairman and chief executive John Hartigan on August 8. He says the investment underlines the company's commitment to newspaper publishing in Townsville – one of Australia's fastest growing regions – and will make the ‘Bulletin’ an even more compelling proposition for readers and advertisers “North Queenslanders will also benefit from a big improvement in the quality of The Australian, Weekend Australian, The Courier Mail and Sunday Mail, which are all printed in Townsville.” News Limited group technical manager Barry Johnson says the five-tower, two-folder shaftless Geoman press – similar to those being installed as part of an upgrade at Chullora, Sydney – will be delivered late next year for installation from February 2010. It will print up to 160 pages of back-to-back four colour. Both folders will have stitchers, and one will have quarterfold with quarterfold glueing. News has the double-width, tower-style Geoman presses at its Perth print site in Western Australia, and has been in the process of installing the Newsman presses at Chullora with Geoman lines. “We’re in the process of installing the second-last Geoman at Chullora, and it has been an excellent installation,” says Johnson. “We’ve been very delighted with the results, particularly the shaftless technology which has paid rewards in very low start-up waste.” An annexe to the 1997 building in Townsville will house the new press, and planning permission for this is expected before Christmas. Installation of the new ferag mailroom will be a complex, five-stage process, with a small part of the existing system retained and the publishing area extended into the old press hall without disrupting production. “This will be quite a difficult task, with the new publishing room overlaid into the existing room (where a mezzanine floor already exists) plus the area of the old press table,” he says. North Queensland Newspapers general manager Jason Scott says the introduction of the new press will be the single most important event in the Townsville newspaper’s 150-year history: “The introduction of world-class printing means the paper will finally have the look and feel to match its editorial standards. It’s terrific news for both our readers and our advertisers.”
Sections: Newsmedia industry