Inert UV has a way to go, 'Le Monde' finds 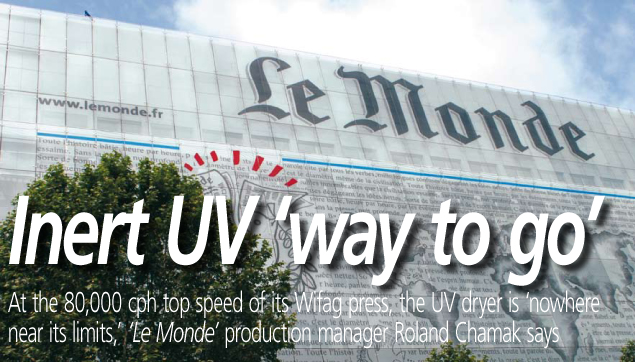 Major European inert UV newspaper site, ‘Le Monde’ in Paris, is producing good quality semicommercial work in a range of formats. And the publisher believes the technology is “no where near its limits” at the press speed of 80,000 cph. An open house earlier this year provided an opportunity to view the installation in Ivry-sur-Seine – based on a Wifag OF 370GTD pressline – along with the results of printing tests conducted over several months. Regarded as one of the most important opinion-forming daily newspapers in France, ‘Le Monde’ was founded in 1944 by Hubert Beuve-Mery, and has a circulation of more than 450,000 copies. The site also prints many of other newspapers, among them ‘Les Echos’, ‘Le Journal du Dimanche’ and ‘Directmatin plus’. Among those at the open day were a delegation from WAZ media group (Essen) and representatives of Latin American newspaper companies from Rio de Janeiro, Belo Horizonte and Porto Allegre. Specialist presentations – from the Swiss press manufacturer, and Eltex-Elektrostatik which makes the curing system – followed production demonstrations with the four-high blanket-to-blanket tower, which has been in service since late 2003. The press was equipped with the Eltex Innocure UV system in mid 2007, with tests following with normal newsprint and LWC paper. UV inks were used in combination with normal blankets and hybrid cylinders, and were tested for their suitability in practice. Wifag and Eltex have been development partners since a test series which began in 2003 in St. Gallen and later at the ‘Neue Zürcher Zeitung’. Eltex is regarded as a pioneer in UV drying at high web speeds. The polymerisation-based UV process had been used mainly for sheetfed offset and single-width newspaper printing. Eltex’s inert UV system – which protects surfaces with a layer of nitrogen, speeding curing – has been the subject of projects at Herold-Druck in Vienna, Austria, at manroland in Augsburg and Transmag in Canada. Web leads are shorter, making the system attractive for retrofits, and experience so far indicates the process is a real alternative to heatset at web speeds of up to 13.7 metres/second. The enabling components – high-power UV modules (one for each side of the web), electronic switching and peripheral devices for energy optimised cooling, air exhaust and nitrogen supply – allow reliable, economic and ecologically-responsible operation. In the Innocure system, oxygen (from air) is replaced by nitrogen using high-voltage plasma across the web. This prevents the inhibition of the photoinitiators and chain-breaking during polymerisation. At the open house, ‘Le Monde’ production manager Roland Chamak pointed out that national newspapers faced a difficult market and needed to compensate losses by finding new market niches. “Improved product quality and also increased production flexibility can be achieved through expansion in the semicommercial area,” he says. “A press can hardly be profitable with just the daily newspaper as a core product, and broader utilisation is needed for a higher ROI.” Chamak says products must be more attractive to readers, and the portfolio extended to magazines, weekly newspapers, advertising papers and inserts. “With Wifag and Eltex, we have tested semicommercial hybrid products and gained coldset/UV practical experience over the past months, establishing the printing and commercial limits of the process,” he says. Despite problems through the short time window available for tests, significant progress had been made with different printing inks (and manufacturers), blankets, rollers and types of paper, resulting in high process stability without variation: “By the third test we could produce complete print-runs of over 100,000 copies,” he says. “We produced a special edition for DRUPA, and have declared the test phase as being successfully completed. Shortly we will make an investment decision that will enable the use of this progressive drying technology in daily production.” Chamak says that while tests always involve compromises, the best solution would be to dedicate a tower exclusively for UV production or extend the press: “In the meantime, we print eight million newspapers a week and thanks to the new possibilities we will further increase capacity utilisation level. Our record is 3.5 million over a weekend. “At present, the capacity of our press is 80,000 cph and the UV dryer is nowhere near its limits.”
Sections: Print | Digital newspaper printing