Océ's Frisch on the opportunities in digital 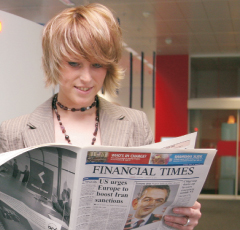 Imagine newspapers printed directly from PDFs, which can carry your birthday greeting on the front page and change their editorial and advertising from city to city, area to area, suburb to suburb. These are the scenarios envisaged by Michaela Frisch, global head of Océ’s Digital Newspaper Network, in presentations on digitally printed newspaper business models and in conversations with publishers. Benefits for publishers would include decentralised workflows, with presses offsite at several locations, plateless printing, no changeover, distribution savings, greatly extended deadlines allowing more up to date news and, most important of all, variable data that could be applied to create ‘versionised’ mastheads. “By printing directly from computer to press, you eliminate several layers of production, cut your production costs and allow deadlines minutes before the newspaper is printed,” she says. Interest in digital newspapers follows the release of a number of faster web-fed inkjet systems, among them Océ’s JetStream, shown at DRUPA last year. This prints in full colour at 180 metres per minute, equivalent to about 1600 48 page tabloid newspapers an hour, with the ability to vary the content by individual newspaper if required. While Frisch acknowledges that this is still below standard newspaper offset production speeds, she says it suggested interesting possibilities to publishers: As an example, US regional newspaper the ‘Arizona Republic’ prints the main newspaper offset but offers various sections printed digitally, including a Spanish-language component, which can be ordered separately. She identifies four ways in which newspapers can currently take advantage of digital printing to raise revenue and combat the challenge of online delivery systems. These are: Decentralised newspaper production: Additional printing presses located away from head office, such as country areas or, in the case of national publications, in each state, enabling simultaneous publication of each production. Additional special editions: These could be short run supplements, with a specialist readership, such as a local edition in country areas, business editions sold at airports and international hotels, aimed at business travellers, special language editions, or, in the case of a national newspaper, a state edition to complement the national core edition. Newspaper micro-zoning: Giving marketers the opportunity to sell advertising based on geographic areas, such as wealthy suburbs, rather than offering the current scattershot approach across all levels of readership. Individualisation: To address readers more relevantly and to increase response rates for advertisers. “While some of these may sound far-fetched at this stage, it is important to recognise that readers will respond to newspapers that respond to their preferences and desires," she says. “Smart marketing people will build on the models we have presented here.” Will this combat the growing influence of online content? Frisch believes it will, pointing to evidence that readers prefer the tactile appeal of a newspaper and the ability to scan content, rather than look for headlines online and then download stories one at a time on a bulky laptop. “At the breakfast table, on the bus, on the train, on the aeroplane, it’s easier to carry and read a newspaper than power up a laptop. If newspapers can meet the challenge, it’s no contest,” she says. Océ’s Digital Newspaper Network prints several thousand newspapers each day around the world at six print sites delivering ‘look and feel’ similar to offset newspapers. These are in Sydney, Singapore, Zurich, London, New York and Los Angeles. Titles including the ‘New York Times’, the ‘Guardian’, the ‘Nikkei’, the ‘Neue Zürcher Zeitung’, the ‘Globe and Mail’ are produced at the print sites and provided to readers in these locations, usually through international hotels and airlines. Included among them is the Fairfax publication the ‘Sydney Morning Herald’ which is printed in three sites and made available in hotels and on Qantas flights. gx Pictured: Michaela Frisch with one of the newspapers that Océ prints on its Digital Newspaper Network. This copy is printed on Océ’s new JetStream inkjet press.
Sections: Print | Digital newspaper printing