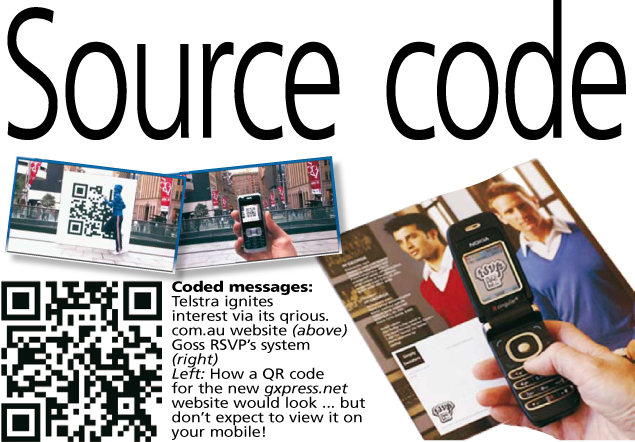 Two new response systems are set to exploit growing use of internet-enabled mobiles to make a stronger connection between print and online. A new system from newspaper press manufacturer Goss international will be launched in Australia next month, while Telstra is in the process of introducing a mobile code system for its Next G phone users. Both can use two-dimensional barcodes – which are scanned by phone cameras – but these will not be interchangeable. Telstra was downloading free software to its customers this month to enable them to read the open QR codes it has been promoting, and says it will provide a free code generator on a website. Scanning a code printed on “virtually any surface” will take a user to a mobile website, accessing content including weather, localised maps and mobile videos. Telstra says its revenue will come from call charges, although some websites will have an entry cost. The QR technology has already been embraced by Fairfax, which launched the concept in a four-page broadsheet ‘special promotion’ while explaining how it would work with its own mobile initiatives. Goss, which introduced GossRSVP at Nexpo in April following trials in the USA, says its response system allows advertisers to see in real time which print ads get the most response. Options include the ability to provide coupons, extra product information or links to a website which might give directions to the store. Publishers and advertisers can also create polls, daily specials and even trivia questions and jokes. Goss International print finishing vice president Toby Clarke says that while the two systems may compete in a few areas, “what is great is that both will expand the value of print”. And he says there is good news in the fact that mobile telephone companies are finally allowing and supporting downloads to the phones to capture the 2D codes. “There are two parts to GossRSVP,” he says. “The first is capturing the start point with the phone, either by scanning a 2D code or sending a SMS with the code). The second and more important is the server technology that receives and processes the request from the phone.” He says the GossRSVP system will do much more than just enabling the capture and directing to the customer’s server, and will provide server functions for a multitude of customers. Future capabilities of the Goss system are expected to allow advertisers to create a loyalty programme from print campaigns, transfer loyalty points to an existing programme, send email promotions and home mail. With the campaign defined, the GossRSVP system will provide a unique seven digit alphanumeric promotion code to include in the advertisement or editorial. When the consumer sees the promotion, they text the promotion code to a published number to receive the offer in a message, while the advertiser is notified of the response. Phones with the software downloaded can scan the 2D barcode to submit it. The GossRSVP server receives the consumer’s phone number and the promotion code, and sets up a non-interactive account for them. Trialling of the GossRSVP system began in the pages pf the ‘Foster’s Sunday Citizen’ last December, and continued with other publishers and student titles close to the Goss facility in Durham, New Hampshire. Telstra unveiled its mobile codes system in June on the day it opened a new flagship T[life] store in Melbourne, promoting the concept with teaser videos on a website. Consumer and channels managing director David Moffat said the technology had the potential to radically change the print and outdoor advertising industry by providing advertisers the opportunity to have more meaningful dialogue with customers and a better understanding of their interests. Available content will include news, sport and weather information, music files, maps and tickets to shows, video presentations and links to social networking sites. Information can be stored for later use. Telstra says its partners include Sony Australia, Metlink and Sony Ericsson. Imaged two-dimensional barcodes – of which there are more than 30 including derivatives – are being used in a variety of applications, including graphic arts industry uses such as identifying the positions of plates to be mounted on newspaper presses. Telstra is using the open QR (for quick response) code created in 1994 by Denso-Wave of Japan and popular there. An international standard was approved in 2000 and updated in 2006. It can carry up to 4296 alphanumeric characters. The smaller codes used by Goss RSVP – and the Upcode system shown by rival press manufacturer, manroland at IfraExpo in 2006 – are similar to the proprietary CP code with its L-shaped border. gx
Sections: Print | Digital newspaper printing