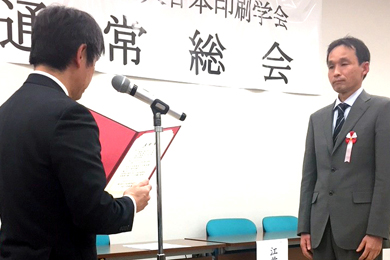 Screen's Truepress Jet520HD inkjet web press has been honoured with an award by Japan's Society of Printing Science and Technology, following up on the InterTech award it won last year.

The JSPST awards each February recognise technologies that have made an outstanding contribution to the growth of the printing industry or to the development of applications for other fields. Points including the level of innovation, progress, marketability and expandability shown by each technology are considered.

The Jet520HD has 1200 dpi printheads that deliver a rich colour gamut and superior image quality which Screen says approaches offset printing, at "industry leading speeds". The downside in a news publishing scenario is speed - 150 metres/minute maximum, but down to 50 metres/minute for coated stocks with the 1200 dpi resolution and SC inks.

President of Screen Graphic Solutions Tsuneo Baba says the company was delighted to have been honoured by the JSPST: "We listened to calls from the market to be able to print directly onto standard offset coated paper and subsequently developed our award winning Truepress Jet520HD and SC inks," he says.

"Together these products deliver significantly improved cost efficiency and image quality that opens up a wide range of new applications in areas ranging from personalized direct mail to publishing and standard commercial printing."