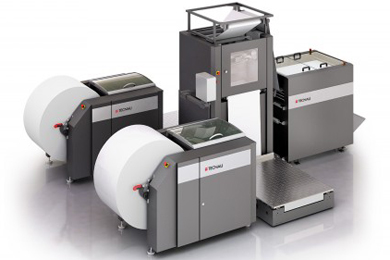 A new zero speed splicer combined with a splicer unwinder is among new offerings for inkjet printers being released by peripheral maker Tecnau.

Also being rolled out are new systems for high-speed cutting and stacking, a short-run version of its Libra book-block production unit, the addition of dynamic scoring and creasing to perforating units and new roll feed systems for sheet-fed inkjets.

The Revolution 50 series is a family of products capable of up to 200 mpm with IoT (internet-of-things) compatibility. First up is a new Stack 5250 system for cutting and stacking continuous output, a 'red hot' hit at Print 18 in Chicago in October.

The Zero Speed Splicer r40 (pictured) pairs two splicers to maximise inkjet productivity, saving downtime of up to 25 per cent from roll changes. It can also produce mini-rolls for urgent work, or switch back and forth between rolls job-by-job.

An addition to the Libra book-block making family includes fully dynamic cutting, perforating and folding modules but offers a lower level of automation for short-run glued book blocks for inline or near-line binding.