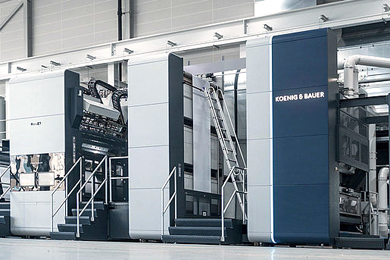 Koenig & Bauer's RotaJet digital press has been named a 'winner' in this year's German Design Awards.

The prize - which celebrates innovative developments in product and communications design - was presented during the Ambiente consumer goods fair in Frankfurt.

A silver and grey colour scheme accentuated by a blue segment with an illuminated company logo and function panel distinguishes the press, which convinced judges in the 'industry' category.

Head of corporate communications and marketing Dagmar Ringel says every detail of the uncluttered operating concept is tailored to the needs of the user: "With the German Design Award, we have received a further important prize for our RotaJet. That is clear indication that we are on the right track with our modern press design."

The award jury praised the coherent design language, clear structuring of the press sections and the easy accessibility of all operating elements.

The award is made by the German Design Council, a foundation established in 1953 on the initiative of the federal parliament.