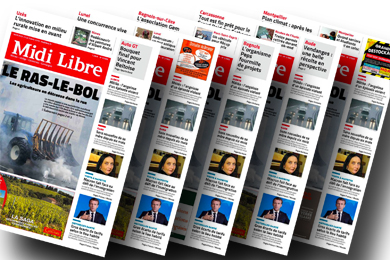 Digital printing plant now being installed in Montpelier, France is central to a new initiative aimed at building a future for a regional daily and the nation's press.

Midi Libre - which serves the Languedoc Roussillon and Aveyron areas of central southern France through 14 editions printed on two Wifag offset presses - is to switch some of its production to a new inkjet web newspaper line in the first stage of a programme to deliver hyper-local newspapers to readers.

A high speed Kodak Prosper 6000C inkjet press with manroland Goss FoldLine inline finishing is currently being installed at the print centre in Saint Jean de Vedas, and Leonard Mathieu, Kodak's Paris-based regional sales director for enterprise inkjet systems, told GXpress it will be in production before the end of the year.

The integrated digital pressline will print 12-15,000 copies a day of specially localised and personalised editions, 364 days a year - plus group publications such as the Midi Olympique rugby weekly - in the first stage of the project.

"Some of the editions are small volume, and Midi Libre will migrate them to the Prosper line," Mathieu said. "The initial runs are well below the capacity of the line, and there are plans for personalised editions with reader-selected content in the second stage."

The family-owned publisher, La Dépêche du Midi will also look for contracts to print international newspaper editions and other work on the press. Meanwhile, change is already underway at Midi Libre, with a new look, new sections and expanded coverage of the regional economy

The digital print project is similar to that of Sogemedia in northern France, where the L'Observateur series of newspapers now offers geotargetting to advertisers and content choices to readers (see 'Exciting era' dawns with personalised print, GXpress March 2017).

Over recent years, the French government has dug deep to help address unique issues in preserving its language and written culture throughout its country and colonies. As in most of the rest of the world, newspapers face a common threat through competition for audience and advertising revenue from online platforms. Daily newspaper France Soir closed in 2012 and at least two more of the country's daily newspapers are believed to be in difficulty as disposable income falls.

Government money is also reported to be helping digital publishers and start-up projects including incubators launched by regional dailies Ouest-France, Sud-Ouest and Nice-Matin, according to Le Figaro.

One, dubbed Theophrastus, operates from the top floor of Sud-Ouest's Bordeaux headquarters, while another has space in the headquarters of La Montagne in Clermont-Ferrand. Center France is establishing a sponsorship system between journalists and participating start-ups. Nice-Matin plans a collective space to host both incubator and medialab, aimed at identifying new media opportunities.

France's ministry of culture and communication is reported to have supported 19 media incubator projects to the tune of 4.4 million Euros (A$7.12 million).

Meanwhile, Midi Libre is continuing the practice of of using technology to break new ground: On the first print edition of GXpress, more than 20 years ago, we reported how the then 200,000-circulation paper was using shaftless technology to increase editions from 12 to 17 while dramatically saving waste and without stopping its Wifag presses.

Now the aim of using inkjet production in a project to build its base of local subscribers, and delivering more local content with same number of editions continues that tradition.