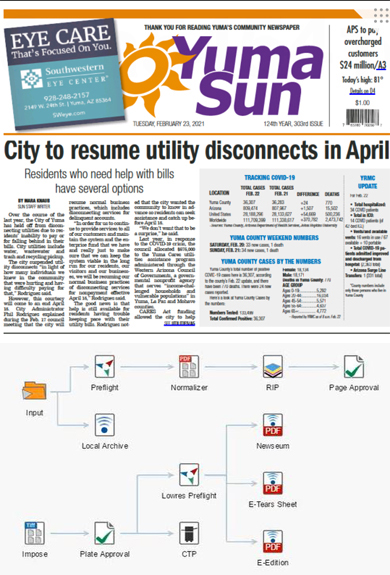 A2018 upgrade to the ProImage Newsway system the Yuma (Arizona) Sun had been using since 2005 added server-based Pitstop preflighting and a single user interface. Now the increased functionality and added options has prompted to bring its California papers - the Santa Maria Times, the Appeal Democrat in Marysville, and the Antelope Valley Press in Palmdale - as well as the Sun Chronicle in Attleboro, Massachusetts, into remote workflow management.

Each of five press sites accesses Yuma's centralised system, with pages for each uploaded, RIPped, imposed and soft-proofed there, and each approving its own plates before TIFF files are sent for local output.

Late last year, image-toning software and ink optimisation was added for all sites, optimising image quality and contributing to ink savings estimated at 20 per cent.

The workflow software is also used to create pages for digital editions and newspaper archives.