What digital advertising lacks in audience interaction, print more than makes up for in its potent ability to captivate. Time for print media to step up and fill the effectiveness gap 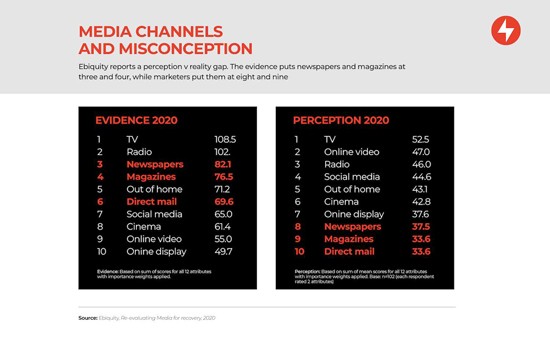 Despite evidence to the contrary, there’s a huge discrepancy between which channels marketers think are top drivers of profitability and what actually are. The agency blinkers are on when it comes to realising the power of print media. And a new WARC report further confirms this significant gap between perceptions of media performance and what the evidence shows. However, in canvassing audience consumption and opinion, the report reveals that print’s unique qualities of creativity and effectiveness are perfectly placed to excel where digital doesn’t.

In the area of engagement.

The World Advertising Research Centre Global Ad Trends study shows the evolution of advertising spend and reveals the predicted spend on digital media advertising in 2021 to be up by more than ten per cent, and traditional print media 12-14 per cent. But adversely, the report reveals that 55 per cent of marketers want a greater focus on campaign effectiveness, with 53 per cent looking to more innovation. 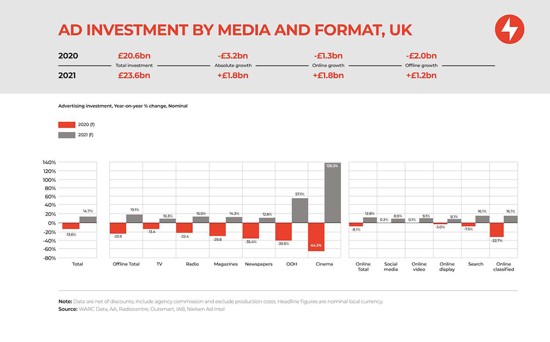 Surely then, marketers are missing a trick here. With its endless creative possibilities, print excels at both.

Print’s effectiveness was powerfully proven in Ebiquity’s 2020 Re-evaluating media for recovery report. It looked at how brands could grow during these challenging times and found that brand salience is now number one out of the ten most valued attributes in an ad campaign. Yet even though evidence shows newspapers and magazines lead the list of media that increase brand salience – coming joint second alongside radio – marketers perceive them as being at numbers seven and eight. If print media is tops for brand salience, then it can satisfy the demands of those canvassed in the WARC report who value effectiveness and innovation – qualities that ensure brand salience – or its ability to get noticed and provoke a reaction.

It’s not just about what the advertisers want. An ad’s success depends on the desires of the audience too. WARC points to survey data from the Global Web Index (GWI) in the UK and the US that shows younger audiences want to connect with advertising on an emotional level. As a sensory marketing tool, print trumps digital. Its tangibility and haptics give it the power to entertain, move, appeal to the senses, provoke a response and ultimately connect to a brand. But the Ebiquity report puts magazines and newspapers at six and seven out of the top ten channels perceived to provoke an emotional response. In reality, they’re up there at numbers two and five.

One thing that turns consumers right off a brand though, is being bombarded with too many ads. Saturation has a highly damaging impact on brand sentiment, something that digital campaigns are all too often guilty of. WARC reports that social media campaigns are often called ‘excessive’ or ‘intrusive’. Instead, says the report, ‘a rising focus on advertising in quality contexts will help avoid this’. While a digital ad campaign can have a catch-all, scatter-gun effect that customers can be blind to or even be annoyed by, print ads can more easily be targeted to a content-specific and relevant audience in a quality, trusted channel. Ebiquity reports that direct mail comes in at number six in the top ten channels that target the right people at the right time. But perception puts it at just over number three. Direct mail is twice as effective at targeting than marketers think it is.

WARC recently released figures on average daily consumption of media. The results are promising – the time spent on print has increased in some markets. In France for instance, it has risen from 0.15 minutes in 2017 to 0.26 minutes in 2020. Even more promising is that the total media consumption time for Gen Z and Millennials across European audiences is almost double that of Baby Boomers. So the younger the audience, the more media consumed. 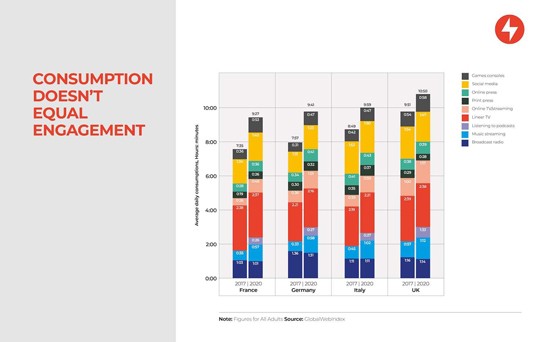 Consumers are spending increasingly more time with media, with print media consumption slightly increasing in three out of four countries. The consumption of media has become an important yardstick for brands and agencies for media planning. The more people spend time with a channel the more important it should be in the media mix. This thinking however doesn’t include the difference of attention level for these media. Reading a timeline requires less attention than reading a newspaper article, the context of reading an article online is very different from reading it in your preferred magazine. Media planning based upon time spend therefore falls short of the more important criterium of attention.

But while digital consumption is high among younger audiences, this does not necessarily translate into higher levels of attention. Ebiquity finds that younger audiences are easily distracted online, with one in two saying that they regularly switch between multiple smartphone apps. So brands only have a short time to deliver entertaining campaigns online. If they don’t command attention, the audience will move on. When it comes to getting your ad noticed, Ebiquity scores magazines and newspapers jointly at number five, while they’re perceived as being lower down the scale at numbers seven and eight. Print readers tend to be more engaged and attentive. In fact, according to recent IPA Touchpoints data, readers in the UK have spent 24 per cent longer reading their newspaper during the COVID pandemic. Working out to one hour 40 minutes of quality time on the days they read.

Print’s proven high levels of engagement and ability to connect with a consumer can significantly boost its effectiveness in a campaign mix, and ultimately, its ROI. If effectiveness, innovation, emotional response and engagement are high on a marketer’s list of must-haves for the success of their campaigns, then it’s high time they wake up to the evidence and realise that print can deliver impressively on all fronts.

Ebiquity looks to how media buyers can make the shift from perception to evidence and look to how print can successfully deliver in the campaign mix. ‘Digital media audiences and advertising spend will continue to grow, but offline media will remain an important part of the media schedule for the foreseeable future. To optimise their media spend, decision makers need to avoid making judgements based on instinct and interrogate their thinking more explicitly to help make more considered choices based on proof and evidence.’

Peter Coleman: Don’t neglect free-to-air in the push for connected TV
Kevin Slimp: Advice on drives… and help with training
Peter Coleman: Rupert, here’s how you can save more than a few apostrophes
Dietmar Schantin: Subscription teams could learn from online dating
Dietmar Schantin: Bringing the joy of serendipity to digital
Matthew Lynes: Publishing and the planet – Why it is time to take the relationship seriously