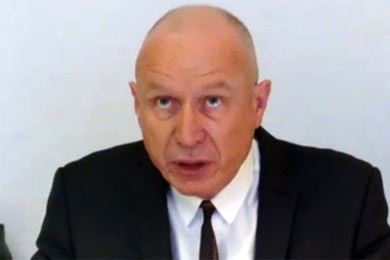 When News Corp chief executive Robert Thomson came on the line to Australia’s Senate media diversity inquiry this morning, it was inevitable that the dialogue should be measured and careful.

But underlying his responses was the strong message that Thomson – who has held four editor roles in the past – is still actively interested in what News’ “philosophy” should be, and that he communicates that to editors.

It was he, not Rupert Murdoch, who met Australian prime minister Scott Morrison for “after dinner drinks”, and he who discussed a wide range of international issues ahead of the publisher driving a new line on climate change.

That stance, he told the inquiry, was in line with Murdoch’s 2006 comment about giving the planet “the benefit of the doubt”. But the recent campaign on climate change was locally-driven by editors, and not a policy from New York.

Not that senators were happy with that, chair Sarah Hanson-Young referring to the apparent change of heart as a “road to Damascus” event, and asking whether news had “got it wrong” before.

Lachlan Murdoch had referred the inquiry to Thomson (top) as the appropriate witness, a role he “absolutely” confirmed, but there were still queries to which the response was that “you’d have to ask him that”.

No chance, given several News execs – including local chairman Michael Miller – have already fronted the inquiry, and time is running out.

Thomson, by video link, argued the issue was “not diversity, it’s consistency”; agreed the company had a philosophy – a word he used several times – but denied that the common line on many editorial issues was the result of direction from above.

There was however, “no inconsistency in our principles,” Thomson argued, adding that News took its social role “very seriously”. Repeatedly he wouldn’t agree Hanson-Young’s “characterisation” of questions, often without explaining.

The inquiry provided an opportunity to argue that digital platforms were “publishers”, and to point out that while publishers in Australia were accountable for mistakes and held to account, “unfortunately, that’s not yet the case for the big digital platforms.

“I think if anybody operates in Australia, and plays a role as a content provider, and wants to make money, they should be subject to Australian jurisdiction.”

He also pointed to the ability of Google and Facebook to “undermine a digital brand’s equity” overnight with an algorithm change.

On first-name terms with Mark Zuckerberg, he generously suggested that the gulf between “intention” and action was the result of bureaucracy. He would speak to Facebook about smaller and rural publishers failing to reach a deal as a part of the media bargaining code.

For News – which has deals with the tech giants in Australia and the US, but not the UK – newspapers had become a significantly smaller proportion of the business. The words “digital disruption” and “big digital” were both “euphemisms”.

As Sarah Hanson-Young and others approach final contributions to the report of a committee in which coalition members have had little active involvement – now due November 15 – the big question remains what recommendations can win government support, given obvious reluctance to incur the wrath of the major player it was created to investigate.

Labor senator Kim Carr suggested the need for parties to express their views on media policy as a general election approached, but there’s hardly an obligation on them to do so, and if – as many believe – News still wields enormous power over government, no incentive for Scott Morrison to side against Robert Thomson’s employer on such issues.