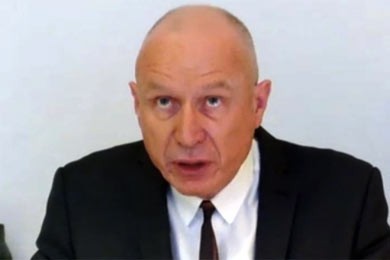 If News Corp’s 2020 was good for anything, it was as a base on which to compare performance in the quarter just past.

Revenues were up 18 per cent and net income rose from $US47 million to US$267 million, those in digital real estate rose 47 per cent, and Dow Jones scored its highest first-quarter revenue and profitability ever.

The subscription base for Foxtel’s streaming products grew 69 per cent, contributing to a 46 per cent in segment profits, and even news media revenues grew 18 per cent.

So why was Australian marketing newsletter B&T jokingly anticipating that Rupert Murdoch might threaten "don't make me come down there", and talking of a loss on local operations of $60.7 million?

In the quarter Thomson (pictured) last week called “the most profitable of its kind since NewsCorp was relaunched in 2013”, news media was “an especially notable contributor to profitability”, thanks to “significant digital advertising growth” and “our groundbreaking agreements with Google and Facebook”.

Segment EBITDA at US$34 million looked good against last year’s US$22 million loss and the previous year’s US$7 million contribution, the change marked with two asterisks as “not meaningful”.

Good news for Australia comes in the form of subscription video activities, where Foxtel’s paid subscribers rose 17 per cent to “around 3.9 million”, primarily due to the growth of Binge and Kayo. Foxtel Now paid subscriptions fell from 298,000 to 227,000 in the period.

Group EBITDA’s US$56 million “reflecting higher revenues and cost savings in the UK and Australia was also positive, as was the increase in paid digital subscribers for news mastheads from 685,000 to 850,000.

As in previous years, an EBITDA item is labeled “other”, a loss of US$56 million this year is an increase from the US$50million of the previous period.